It’s funny to see people reactions when we tell them that we’re cycling 4,630km up Africa on single speed bikes. Some say “you’re mad!”, some say “I wish I could join you!” and then there’s Gareth Pickering who simply said: “Can I come?”

Gareth has spent the last few years travelling the world and fighting for his freedom as you can read about on his website (www.TheFreedomFighter.net). He was about to head off back to South East Asia when he heard about the Joburg2Kili expedition and it took him no time at all to decide that he wanted to join in. We’re thrilled to have another seasoned traveler on the team (Bobby Fuller has traveled most of the world too!) and another crazy person who’s willing to take on the challenge of cycling a 23kg single speed Qhubeka Buffalo bike thousands of kilometers for a good cause.

Welcome to the team Gareth! As you’ve already bought your bike there’s no backing out now 😉

Please support Gareth and the rest of the team by donating to Qhubeka today. 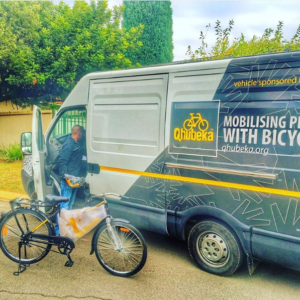