Since our last update we have had an incredibly busy and action-packed few days. Our last day in Botswana was spent in Kasane (Chobe) where we ended off on a three-hour boat cruise with Thebe River Safaris. The river cruise takes you into the Chobe National Park on the Zambezi river where we saw elephants, buffalo and lechwe feeding on Sedudu Island, crocodiles and hippos on the banks and some giraffes coming down to drink at the river edge as well as an incredible African sunset. It was definitely the perfect way to end our stay in the beautiful country of Botswana. 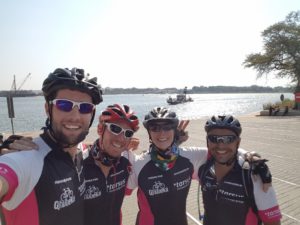 The next day we left Thebe River Safari Campsite fairly early as we knew we had a border crossing to contend with and we weren’t sure of how long it would take us to get through to Zambia. The Kazungula border crossing is quite unique as you have to cross over the Zambezi river on a ferry to get to the Zambian side of the border. The four cyclists crossed over ahead of the cars.

As there was a lot of paperwork to deal with to get the cars across we decided to get a local to help with all the admin which in hindsight cost us a lot more than we would have liked but they really helped Bryan and Bobby get through the process quicker which ended up being over 3 hours. A lot of lessons were learnt at this border crossing which we will take with us to all border crossings going forward such as making sure you have US Dollars or Kwacha ideally to pay with at the borders and do your research on all the costs you should be paying before crossing.

Due to the delay at the border to get the cars processed we only started cycling at around midday in the heat of day. To make the conditions more challenging we also had a headwind to contend with and a couple of hills which we haven’t seen in weeks since riding along the flat roads of Botswana. After probably one of our toughest but shorter rides we finally made it to the wonderful Jollyboys Campsite.

As Warrick works in the action sports industry he has good working relationships with a lot of the action-sport companies in Livingstone. One of Warrick’s colleagues is Tony Barnett who a few months back suggested that he would be able to arrange for the team to bungee jump with a Qhubeka bicycle whilst in Livingstone. Both Derrick and Gareth decided they wanted to take on the challenge and they made history by being the first ever to jump off the Victoria Falls Bridge with a single-speed, 20+kg bicycle! Thanks to Shearwater Bungee for helping make their bungee cycle successful. Bobby as well as Warrick and the team mascot, Barney, also bungee jumped but with no bicycles. To read more about it and to view the video click here.

Warrick, Bryan and Camilla decided to walk over to Zimbabwe to go view the natural wonder of the world, the Victoria Falls. The rest of the team stayed behind at the Bungee restaurant to celebrate the successful bungee jumps.

To keep the adrenaline pumping the next day, Tony Barnett helped organise the whole Joburg2Kili team to go for a half day trip White Water Rafting down the Zambezi in the Batoka Gorge with Safari Par Excellence. Although we only did a half day trip, this still included the 10 biggest rapids. The river guide, Boyd was really fantastic and even though he was taking us through the hardest lines on the first 6 rapids we managed to not tip over. It was only at lucky number 7 that things took a flip. Cam, Warrick and Gareth fell out the raft at 7 and then at Rapid 7b the boys went down into the rapid and hit the first wave, which flipped the entire raft over. This was followed by another flip at rapid 8. Rapid 9 is a compulsory portage as it is a class 6 rapid which is extremely dangerous. The final rapid we went down was rapid 10 which we managed with ease. It is incredible to see how powerful the river is even though it is not at its peak. Once off the rafts we then had to hike up a 200m gorge which had incredible views from the top. We were then taken back to David Livingstone Hotel for lunch before being taken back to Jollyboys Campsite. To check out the highlights of our rafting experience click here. In the evening we thought we would treat ourselves to a drink at the famous Livingstone Hotel that looks over the Zambezi.

As there are so many great things to do in Livingstone we decided to change up our schedule a bit and take an additional rest day. To take advantage of the extra day everyone planned their own activities for the day. Warrick, Cam and Bobby decided to go through to have a full body massage at a recommended local spa called Namakau which was much needed after all the cycling we have been doing. As Gareth and Derrick missed out on seeing the Victoria Falls on the day they did the bungee jump with bicycles so they decided to go through to view this incredible natural wonder of the world along with Bryan. One of Warrick’s contacts, Calvin Mapiye, kindly helped arrange a helicopter tour over the Victoria Falls with the Zambezi Helicopter Company for both him and Camilla so they went through to Zimbabwe to the helipad. The team then met up again for sun-downers at a viewpoint looking over rapid 7 of the Batoka Gorge. It is an absolutely incredible viewpoint and great way to end our last day in Livingstone.

We are now heading north on our bicycles towards Lusaka. The past two days riding have been quite tough with over 30 degree heat, headwinds and a lot more rolling hills. We have been very grateful to be welcomed to stay on two different local farms the past two nights and we are now just past Choma.

The Joburg2Kili team have made it to Livingstone in Zambia where we are now spending two rest days to allow us to take advantage of all the great activities on offer in the area.

Whilst enjoying our rest day yesterday, the two cyclists, Derrick Fourie and Gareth Pickering, decided to take on a seemingly impossible challenge to bungee jump off the Victoria Falls Bridge with their Qhubeka Buffalo Bicycles. Thanks so much to Shearwater Bungee for helping to make history! As far as we know they are the first people to ever bungee jump off a bridge on a single-speed, rigid, 20+kg bicycle! Check out these two videos of how it all went down: