The past few days have been spent relaxing, meeting up with some family, eating lots of delicious local fish and enjoying spending time at the beautiful Lake Malawi. 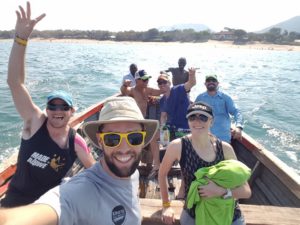 On our first rest day at Senga Bay, Lake Malawi, we arranged an afternoon boat cruise to the nearby island called Lizard Island. Once at the island we snorkeled, Derrick went fishing, Cam and Bobby read their books and Warrick, Bryan and Gareth decided to swim to some nearby rocks where they wanted to rock jump into the lake. Our boat guide, Michael and his colleague prepared a Butterfish braai for us all which included a very generous serving of rice, tomato/onion mix and spinach. We then left the island in the early evening allowing us to view the sunset as we headed back to the shore which was really spectacular. That evening, Derrick’s father and step-mom arrived at the Sunbird Livingstonia Hotel where we met up with them for a wonderful dinner spent catching up on the past week’s adventures.

The next day, Derick and his parents headed back to the island in the late morning for some family time. Bryan kindly volunteered to donate blood as Sam, the owner of Cool Runnings Campsite, volunteers at the local clinic and cancer centre and had a patient that desperately needed a blood transfusion and luckily he was a match. Cam decided to get her hair re-braided as a lot of the braids were coming out from them blowing around in the wind whilst riding. One of the staff at Cool Runnings arranged for one of the ladies from Senga Bay to come through to the campsite to do her hair which was great – nothing beats getting your hair braided with a beautiful view of the lake.

That afternoon, we all headed back to the Sunbird Livingstonia Hotel as Cam’s parents, the Armstrongs, were due to arrive. We all then had some afternoon drinks together with both Derrick and Cam’s parents before heading back to Cool Runnings where Warrick had arranged with them to prepare a dinner for us all on the beach. Electricity certainly is a luxury here by the lake and it seems to be the norm to not have power for at least 6-8 hours a day. Unfortunately, Cool Runnings did not have any power that evening for our dinner; however, they made a plan and we had an absolutely delicious meal on the beach.

The next day, Derrick’s parents had to return to Blantyre for business so Derrick, Gareth and Bobby went through to say goodbye to them after having some breakfast at the hotel.

We had heard that Monkey Bay and Cape Maclear are two tourist destinations worth visiting along the lake so we decided to make a day outing to visit these spots along with the Armstrong’s. It is meant to be about a two-hour trip but it took us nearly 3.5 hours to get there. Warrick’s mapping app suggested we take this dirt road as a short cut which ended up being very slow as it was filled with potholes; however, it was an eye-opening journey for us all as we really got to see how poor this country is and how most Malawian people live and spend their days. It is also very evident how desperate they are for rain in the area as the land is just bone dry. The dirt road eventually took us back onto the main tar road we should have taken from the start and we made our way to Monkey Bay.

We were pleasantly surprised to find that Monkey Bay is actually not touristy at all. We drove into the Monkey Bay Lodge and hoped to find a suitable restaurant for lunch but unfortunately they had no food or drinks to offer us. The lodge has a great view of the Monkey Bay port but that was about it so we asked them where they recommended we go instead which was Cape Maclear. To get to Cape Maclear you drive through the Lake Malawi National Park, which is set in a beautiful mountainous, rocky terrain and ends at the Lake.

At Cape Maclear we headed to Mgozo Lodge which was recommended to us by two Scottish girls who said it had the best food. After a delicious lunch, we all decided to take a stroll down the beachfront. It is amazing to just see how the lake is so important to the locals and how full of life it is; there are tables of tiny fish being dried out like biltong, hundreds of Malawians cleaning fishing nets, washing clothes, pots and pans and children swimming and playing in the water. After the boys had a swim in the lake we decided to start making our way back to Senga bay.

We drove back along the tar road avoiding the dirt road “short cut” but we hit traffic hour on our way into the town of Salima; however, this is not your normal car traffic we are used to but rather bicycle traffic.It is incredible to see how many bicycles there are in Malawi and it really is the main form of transport in the country. You see people using their bicycles for transporting everything from wood, charcoal, goats, pigs, petrol and additional passengers. We finally made it back to Cool Runnings after negotiating the bicycle traffic along the way. Cam & Warrick went for dinner with the Armstrong’s at the Livingstonia Hotel and the rest of the team went to the next door restaurant along the beach.

We spent our last day in Zambia on a rest day at Mama-Rula’s Campsite in Chipata which was much needed after some hard days of riding our Qhubeka Buffalo bicycles. Bobby was still not well and so he decided to go through to a local doctor, which was recommended by the owners at Mama-Rula’s. The doctor did some tests and gave him a dose of anti-biotics, which seem to be working well and Bobby is back to his normal entertaining self.

On Friday we all got up before sunrise to get packed up and ready to head off to Malawi. After our 3 hour experience at the Kazungula border crossing into Zambia we thought we better give ourselves plenty time to get through the Chipata border into Malawi especially as we still had just over 100km to ride that day to get to the Duck Inn.

We were much better prepared this time for the border crossing having gotten local Malawian Kwacha the day before and being better informed about the costs to expect to incur to get the cars through the border. However, it still took us about 2 hours to get through but it was a much easier process.

At the border we met up with Favio M Giorgio from Argentina who is cycling around the world. His bicycle weighs about 65kg with all his worldly belongings on him and we wish him all the best with his incredible journey.

Once through the border the ride was fairly flat and downhill for most of the way to our planned campsite for the night called the Duck Inn. Although the Duck Inn is not really a campsite, Warrick managed to speak to the manager, Scott, who was happy to have us come through to stay for the night. It really is such a beautiful spot looking over a big dam with lots of birdlife – a real gem.

From Duck Inn we had a short ride of just over 50km to Lilongwe. We were in for a real treat in Lilongwe as Shahid Samamad from Pulsit Electronics who is a contact of Derrick’s family very kindly put us up at the Sunbird Capital Hotel for the night. Big thanks to them as it was such luxury to be able to sleep in a bed for a night – it really is the small things you come to appreciate so much more when camping for nearly 5 weeks. Warrick was in contact with Scott again from Duck Inn who recommended a restaurant for us in Lilongwe called Kat-man-doo where we all went for dinner- the Nepali Momma’s are amazing! 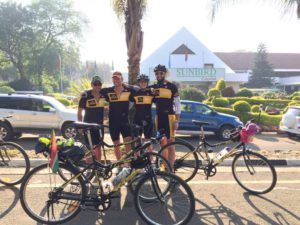 Yesterday we got up at sunrise after a great nights’ rest at the hotel and enjoyed having a buffet breakfast before starting our 120km cycle through to Lake Malawi. We originally had planned to do this distance in two legs but decided to rather just get it done in one go and enjoy an extra rest day at the Lake. In the first 20km of the journey we were met by Peter from the Malawi Travel Guide who came to meet with us which was really great. He has an awesome website called Travel Malawi Guide with all the info you need to know on where to go in Malawi.

The first 60km of the ride was really hard going as we had about 900m of climbing and we also had a 30km/h headwind we were riding into. But thankfully as you head closer towards Salima the route flattens out although the road is very eroded and so you have to be very careful as you ride through to Senga Bay.

On our first day in Malawi riding on-route to the Duck Inn two British couples drove past us and stopped to find out about our journey. We managed to see them again on our ride to Lake Malawi yesterday and they had just come from Senga Bay and recommended we definitely stay at Cool Runnings Campsite which is where we are now based for the next 3 days.

Derrick and Cam’s parents will be joining us in Senga Bay and staying at the Livingstonia Sunbird Hotel which is about 1km away from Cool Runnings. Lake Malawi is a really beautiful place and we are all looking forward to spending time here.