After a much-needed rest day staying at Kwa Nokeng Campsite, it was time to hit the roads of Botswana on our Buffalo Qhubeka bikes. It was one of the coldest mornings (around 3degrees) we have had so far and we all felt a little under-dressed in our Joburg2Kili Tarsus cycle kits as we headed out for a 114km ride to Itumela Campsite in Palapye but it shortly warmed up very quickly.

Derrick has been struggling the past few days with a sore knee. We were all hoping the rest day would help sort it out but unfortunately as we started to ride he decided he was going to rather get into the Jeep and go through to Palapye with Bobby to try see a doctor about it.

It has been really great having two support vehicles as it has allowed us to send one ahead to go setup camp and/or do some shopping for food. The other vehicle would then sit behind us to warn traffic that there are cyclists ahead and to also allow us to stop and stretch the legs, refill our water bottles, reapply STUF sunblock and grab a few extra snacks. 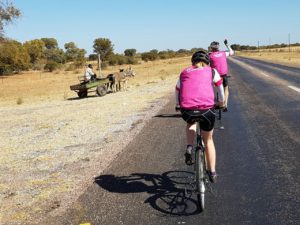 Warrick, Cam and Gareth worked as a team taking turns at riding at the front as we enjoyed riding on the relatively flat and smooth Botswanan roads. Although our average pace was much higher than the past few days, sitting around 23km/h, we were all finding that we were really uncomfortable on our saddles but we just had to keep peddling on. We finally made it to Itumela Campsite where we found Bobby and Derrick who had already setup our campsite.

Derrick managed to see a local doctor in Palaype who was extremely helpful and was able to give him an injection for the pain, strap his knee and give him some medication to hopefully help get him back on the bike again soon.

Bryan helped sort out new sim cards for us all so we can all be connected whilst we are here in Botswana and can keep our supporters updated on our progress. Luckily it was a really easy process and we are all up and running on our devices.

Yesterday we had a relatively easy 82km ride from Palapye to Serule. Derrick’s knee was feeling much better so it was great to have him back on the bike again. We were riding on the A1 main road to Serule and were really pleased to see that there was a side road where we could ride and avoid the traffic. This also meant that Bobby and Bryan could go ahead and didn’t have to follow us the whole time. Other than that we had a bit of headwind but it was not too difficult a day on the bike.

Bryan went ahead to find Jaera Guest House which was a place we were told about by some local Botswanans at Itumela Campsite. He managed to find the place but it was really basic so we ended up all sleeping in our tents within their parking lot but it was much safer than staying in a bush camp on the side of the road.

Today we had just over 100km ride to Woodlands Campsite just outside Francistown. We had a very eventful ride as Warrick got the first puncture of the trip. Shortly after patching up his tyre, Cam then got a flat tyre too. Unfortunately, the repair patches were not holding properly and so both tyres ended up getting flat again. We eventually managed to find Cheetah Tyre Services who very kindly helped us out with better tyre patches. A big shout out to Gareth for all his help changing the Kernes’ tyres over 4 times today.

The ride ended on a bit of a low note though as we had just over 10km of rutted, dirt road to get to the campsite and all the cyclists were taking strain. But thankfully the Woodlands Campsite is very decent and after having a shower and taking some time to just sit and relax everyone’s spirits are up again.